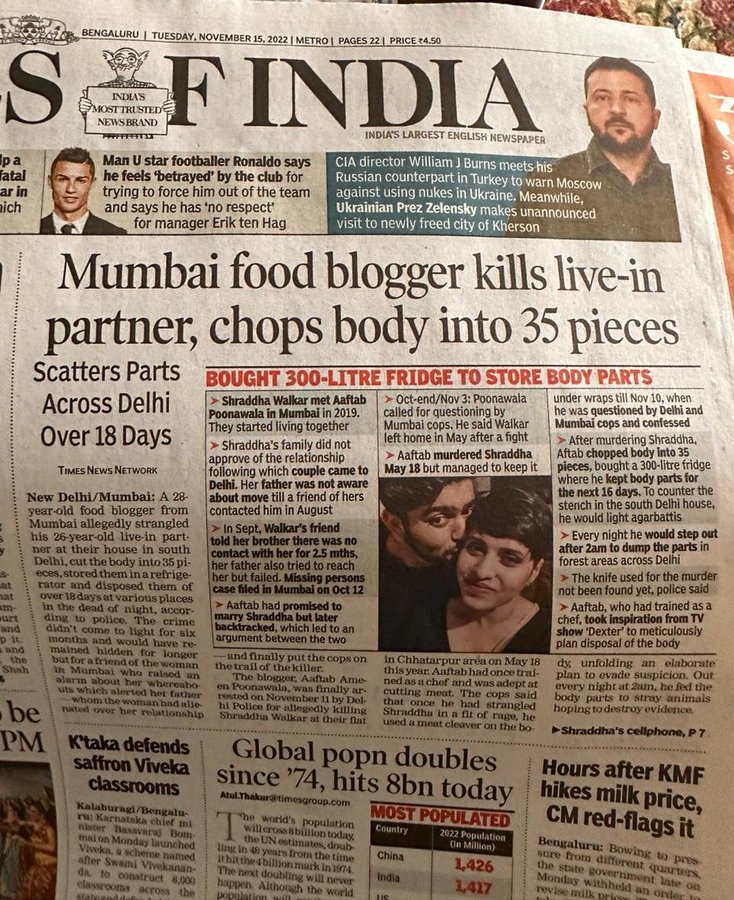 Those who have been following the case of Shraddha Walkar’s murder may have come across various photos and videos that have gone viral on social media. The pictures show a woman with bruises on her face. She is said to have been hospitalised in Vasai near Mumbai between December 3 and 6. Her picture has been shared on several social media sites. It has also been said that Shraddha met Aftab on a dating site. They started dating three years ago. But the relationship quickly turned sour. The couple quarreled about getting married. They then moved into a house where the crime took place.

According to the police, Aftab Amin Poonawala killed Shraddha by strangling her to death in Chhatarpur, South Delhi. According to reports, the accused had an affair with a number of girls before Shraddha. In addition, Aftab had relationships with a number of women in Mumbai and other places. The couple met on a dating site and later moved in together. The couple had a quarrel over getting married and Shraddha was killed.

Police teams collected the 13 body parts of the deceased on the basis of information given by the killer’s live-in partner. These will be sent for DNA testing. The samples will be matched with the DNA samples of the deceased’s father. These will confirm whether the remains are those of the victim. A forensic examination holds the key to convicting Aaftab.

The police have also recovered blood stains from Aftab’s kitchen. The detectives are also looking for polybags, which are considered a vital piece of evidence in this case. The accused was caught carrying a bag in the early hours of the morning.

The police are also investigating whether Aftab Amin Poonawala brought home more women. According to the reports, Aftab told the police that he had a “rocky relationship” with Shraddha. However, he slept in the same room as her body. He also used Shraddha’s credit card to pay off bills. He also kept a cache of chilled beverages and ice cream in a fridge. He also had a large number of incense sticks in the house to suppress the foul smell.

According to the police, the body parts of the victim were chopped into 35 pieces. The body parts were then buried in a nearby forest. The police will now search for more body parts and will be able to confirm whether the ones they have recovered are those of the victim.

Aftab Amin Poonawala is currently in police custody and will be produced in Saket court on Thursday. He will also have to undergo a narco test soon. Aftab is believed to have tampered with evidence in order to conceal his actions.

Shraddha Walker Murder Case Delhi – The shocking incident that sent shockwaves through the country has brought attention to women’s safety, particularly those who are in abusive relationships. Shraddha Walker was hospitalized in 2020 for 4 days

Shraddha Walker Murder Case Delhi – Amidst the ongoing investigation into Shraddha Walker’s grisly murder case, a picture of 26-year-old Palghar girl was found. It shows the terrible truth about her relationship with toxic live-in partner Aaftab amin Poonawalla. Shraddha is seen in the picture with visible bruising around her nose, eyes and cheeks. A hospital report that Shraddha was admitted to 4 days ago, according to a TV channel. This shocking incident has caused shockwaves in the country and has brought attention to women’s safety, particularly those who are involved in abusive relationships.

Shraddha Walker spoke to a newspaper about her experience. Shraddha claimed that Shraddha wanted her to end her relationship to her boyfriend because he used torture and physical assaults on her mentally. Shraddha was forced to choose because Aaftab “emotionally manipulated” her and threatened to kill herself if she didn’t leave him.

Rajat, Shraddha’s other friend, said that Shraddha was afraid for her life. They used to fight a lot. She got into a heated argument and texted me via WhatsApp asking me to take her to a place that night. Rajat, a news agency ANI, quoted her saying that she said that if she lived that night with Aftab, he would murder her.”

Shraddha’s friends intervened and saved her from Aaftab, who also assaulted her in 2021. I saw bruises on her neck and upper chest, as well as her nose. Indian Express quotes her friend as saying, “We had warned him that he would file a complaint with the police.”

Shradha Walker Murder Case: How Far Have We Come?

Shraddha Walkar WhatsApped a Photo of Face with Injuries to Manager

Shraddha Walkar’s WhatsApp chats and Instagram chats from two years ago with friends and coworkers show that she was once so badly beaten by Aftab Poonawala, now charged with her death in Delhi. She couldn’t get up and needed to be admitted to hospital. Sources today confirmed that this.

Investigators say these chats date back to when they lived in Vasai, near Mumbai. They reveal a pattern that led to murder in May.

“I won’t be able make it today because my BP has dropped and my body hurts from the beating yesterday. She wrote that she didn’t have the energy and was unable to get up from the bed to her manager Karan in a WhatsApp chat. Karan also attached a photo of her with injuries marks to her face. Screenshots of the conversations have been sent to Delhi Police. They are also corroborated by her hospital admission at the same time.

Karan was told by her that she wanted to see Aftab move out of Karan’s house today. She also mentioned having spoken with his parents in the chat starting November 24, 2020. This suggests that they had probably split up between.

Karan asked her for her “husband’s name”, which indicates that she had told her office they were married. “Don’t worry. Karan replied, “We are all with you,” and told her that he could also help his sister and mother.

Shraddha, a friend, was having an Instagram chat when she shared a photo showing off her new hairstyle. The friend noticed injuries. Shraddha claimed that her nose was fractured after she “tripped while climbing stairs”.

In this Instagram chat, Shraddha’s friend saw her nose injury.

Rahul Rai, Rahul’s friend, said that he had taken her to the hospital and the police with him. She said that he (Aftab), had attacked her at least twice or three times. As if he tried to strangle her, there was a deep mark on her neck. Shraddha was scared, but the police persuaded her to return home.” claimed Mr Rai.

Now, her friends told police that she was a victim of domestic violence at Aftab’s hands.

“She kept saying that she would leave Aftab. Rajat Shukla, her college friend, said that she didn’t leave Aftab. She had told NDTV months prior about her SOS. She was physically abused. She shared the information with her best friend. We were both part of the same friendship circle so we were all informed.

Shraddha (26 years old) and Aftab (28 years old), were both call center employees. Four days later, after yet another argument about expenses, he strangled her and later chopped up the body into 35 pieces. He then kept the body in a refrigerator and disposed off in a jungle for 18 days. Police have stated that this is what happened to Aftab and Shraddha.

Her father, who had not spoken to her in May 2021 because he was against her inter-faith (Hindu Muslim) relationship with Aftab, went to police after her friends informed him that she’d been disconnected from them for months.

Aftab was placed in police custody for five days more by a Delhi court on November 17. Police said that key evidence, such as the knife used, identifiable body parts and clothing from the day of the crime, as well as Shraddha’s phone, needed to be located.

Police also have permission to conduct Narco-analysis, a chemically-based lie detection test. This could lead to material evidence for the police and support his confession. However, it is not sufficient evidence.

Shraddha walkar murder case: Sources close to the Delhi Police said that they discovered parts of the skull and jaw from Mehrauli’s forest area. To determine if the parts are Shraddha Walkar’s, 27-year-old murder victim, the recovered parts were sent to a forensic laboratory.

On Sunday, the police also searched a Maidangarhi pond where Aftab Poonawala might have dumped Shraddha’s body parts after separating it into 35 pieces.

Sources claimed that Aftab Amin Poonawala also admitted to setting fire to Walkar’s photographs after she had been murdered.

Source said that Walkar was killed on May 23rd. He tried to destroy all evidence and also burn her photos.

Poonawala (28) had murdered Walkar, his partner in crime, in May. He then cut her body into several pieces to make it easier to dispose of.

A senior police official stated that “Following up the disclosures made by Poonawala,” various combing operations were carried out at different places, including some forests areas from which severed bones had been seized.”

The DNA analysis of blood samples from Shraddha’s father and brother has been done to confirm that the bones belonged to Shraddha.

It will take 15 days to complete the DNA test that will determine if the victim’s body parts were found in the forest.

“Police teams are also conducting search operations to find the missing skeletal pieces. The official stated that several inter-disciplinary teams work around the clock to document, find discrepancies, and refine the versions and motives of the accused.

Police say that the crime team and experts in forensics have closely examined the couple’s Chattarpur, south Delhi, rented accommodation.

The official stated that the devices were seized from the scene of the offence to determine if there is any evidence incriminating.

According to the police official, each disclosure by the accused will be evaluated on the basis of admissible evidence value.